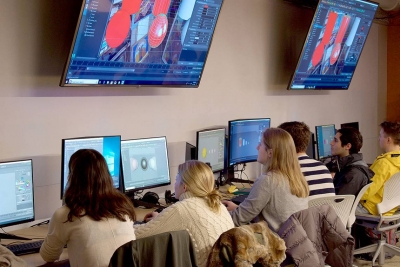 Providing a venue for the scholarly study of gaming, Trinity College of Arts & Sciences recently refurbished a classroom in the Link to create a new Game Lab.

Link Classroom 6 is now decked out with popular gaming consoles — from Microsoft Xbox to Sony PlayStation to Nintendo Switch — as well as a growing collection of board and card games, and several high-end computers and monitors to give those using the facility an immersive gaming experience.

But this experience is designed to go far beyond simply playing games. This facility was created to get students interested in the study and creation of games.

“We’ve created a hub for students and faculty who are interested in games from any perspective,” said Shai Ginsburg, a professor in the Asian and Middle Eastern Studies (AMES) department and co-convener of the Games & Culture humanities lab. “We wanted a place where we could bring in faculty, students and staff from difference disciplines that have interest in games and game studies.”

Ginsburg said the idea began several years ago when several faculty noticed the impact of games and how studying them could be valuable for students — as a cultural product, pedagogical tool, and a means of promoting analytical and strategic thinking.

Duke already had courses and curriculums in films, music and other cultural areas but nothing consistently focused on games. With gaming being very prominent both in the United States and in East Asia, the AMES department took notice.

But pockets of faculty across multiple disciplines — such as Art History & Visual Studies, Computational Media, Arts & Cultures, Computer Science, Romance Languages, and others, such as interdisciplinary labs associated with the John Hope Franklin Humanities Institute — have also been involved in the study and creation of games over the years. Now they have joined in the planning efforts for the new facilities in the Link.

For this semester, only a handful of classes are being held in the new Game Lab — “World of Gaming” (Nayoung Aimee Kwon, instructor), “3D Modeling and Animation” (Edward Triplett, instructor), and the writing studio of the Story Lab writing sessions (Clare Woods, leader).

But the goal is for more departments across Trinity to take advantage of this unusual space that could be ideal for teaching game design and development, virtual reality, psychological aspects of gaming, cultural representation in games, decision sciences, and other topics.

The space could also be used by anyone — students, staff or faculty — who is interested in learning more about games.

“We want to create a community,” Ginsburg said. “We certainly don’t want to take the fun out of games, but we do want to approach it as a scholarly activity.”